UK programmatic digital display ad spending increased in 2020, despite the incredibly challenging conditions. The shift to programmatic trading will further accelerate this year, but certain methods are performing better than others. Social media use played a significant role in driving programmatic direct’s continued growth and dominance through the pandemic—we consider social media ad buys as transacted almost exclusively via programmatic direct. At the other end of the scale, though, open marketplace trading faced a difficult 2020, and things won’t improve much in the coming years.

Programmatic direct will continue accounting for the lion’s share of UK programmatic ad spending through 2021 and beyond, but PMP surpassed open exchange spending for the first time in 2020.

Historically, open exchanges have been the predominant way to trade real-time bidding (RTB) inventory. However, that power dynamic flipped in 2020, with PMP ad spending surpassing open exchange ad spending in the UK for the first time. A 2.4% decline in open exchange spending, combined with a strong showing for PMPs, hastened this trend—12.2% UK PMP ad spending growth in 2020 represented the largest increase for all the transaction types we track.

Pandemic-fueled uncertainty led advertisers to seek transaction methods that could provide more control and reliability amid strained budgets and heavily scrutinized ROI. Things will normalize slightly in 2021, but the scales have tipped for good.

The EU’s General Data Protection Regulation (GDPR) enacted in May 2018 and the upcoming deprecation of third-party cookies on browsers like Chrome and Firefox are hastening the shift to a cookieless environment. The result has been an industrywide pivot from open marketplaces to PMPs or programmatic direct, as well as more interest in contextual targeting and increased use of first-party data.

“With the decline in third-party cookies, it will be tough to run retargeting campaigns at scale, which will lead to a shift in programmatic media buying,” said Lucy Hinton, head of client operations at ad server Flashtalking.

Until the third-party cookie completely disappears, though, shifts won’t be seismic. “Identity initiatives are still very much in their infancy, and we are unlikely to see a web-scale solution for at least 12 months,” she said. “We expect a move toward contextual or publisher-targeted ads, which would suggest a shift from open RTB to PMPs and programmatic guaranteed.”

“PMP deals have increased substantially this year, with buyers and sellers eager for a more reliable and consistent stream of revenue at a time when budgets are strained,” said Pierce Cook-Anderson, country manager for Northern Europe at Smart AdServer. “PMPs are also being used by buyers looking to transact against more quality video content, and the unique first-party data is used to enrich their buying experience and target users in greater detail.”

The cookieless future has also hastened advertisers’ shift toward PMPs. “As uncertainty over programmatic took hold among advertisers, we initially saw a trend toward investment in [private] marketplaces, where there is less dependency on cookies,” said Emma Delserieys, director of customer success and attribution for EMEA at Nielsen. “However, as industry solutions, such as The Trade Desk’s Unified ID 2.0, are being developed to answer ecosystem challenges, there is growing confidence that programmatic platforms will adapt. 2021 will be a year of transition.”

To learn more about the accelerating shift to programmatic trading, Insider Intelligence subscribers can read our recent report: 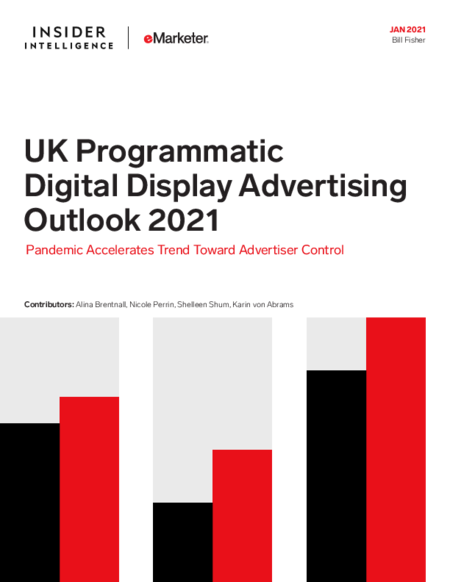 Audio
The Ad Platform: What's coming up for programmatic in the next 10 years

Article
Google runs into GDPR issues with its Privacy Sandbox

Audio
The identity crisis and a unified approach to marketing measurement

Audio
The Ad Platform: Checking in on CryptoRTB and the latest in blockchain tech for digital media

Report
Analyst Take: How Brands in Latin America Are Addressing Diversity and Representation in Advertising

Report
US Ecommerce by Category 2021

Report
Analyst Take: The Outlook for US Podcast Ad Spending in 2021

Article
Achieving holistic attribution is more a journey than a goal

Article
Duopoly still rules the global digital ad market, but Alibaba and Amazon are on the prowl

Audio
How Twitter began 2021, why it acquired Scroll, and its 'professional profiles' test

Audio
What Facebook's Q1 earnings mean, how Facebook Dating is doing, and a smart wristband

Audio
LinkedIn is evolving, virtual vs. in-person 2021 events, and how robots may help us work

Audio
How addressability and measurability are changing in digital advertising