There's an App for that, but Do I Need It?

Older people have a more 'take it or leave it' attitude

Article by Jennifer King  |  Aug 7, 2018  |  2 min read
Download
There's an App for that, but Do I Need It?: Older people have a more 'take it or leave it' attitude
Share
Topics
Mobile Apps
United States

How important are mobile apps to everyday life? Well, that depends on whom you ask.

In an April 2018 survey by ThinkNow Research, 40% of US mobile app users said apps were "very important" in their daily life. Millennials were slightly more likely to feel this way, though not by much.

For the most part, many respondents felt apps were helpful to their daily routine, but they would be able to go without them. In this case, baby boomers were more likely to feel this way (55%) than millennials (39%) and Gen Xers (49%).

ThinkNow Research's survey is just one of many looking at mobile app usage. An April study from YouGov found that 69% of millennials (defined as those born between 1982 and 1999) agree that life is easier because they have apps to do what once required multiple devices. A significant amount of Gen Xers (60%) and baby boomers (50%) were also in agreement, but to a lesser extent.

Meanwhile, eMarketer estimates there will be 221.7 million US smartphone app users this year.

"But while the number of mobile app users in the US continues to rise, as does time spent with apps, the number of apps actually being used is slowly shrinking," said eMarketer senior analyst Rahul Chadha, who recently covered the topic in his report, "Mobile App Installs: What You Need to Know About User Acquisition."

"We forecast that smartphone app users will open an average of 20.4 apps on a monthly basis this year, with that figure declining to 19.2 by 2022. In other words, people are spending more time with fewer apps," he added.

That's likely because people are quick to download an app, but they won't necessarily turn to it on a daily basis. Some may download it as a one-off, while others may simply just stop using it. 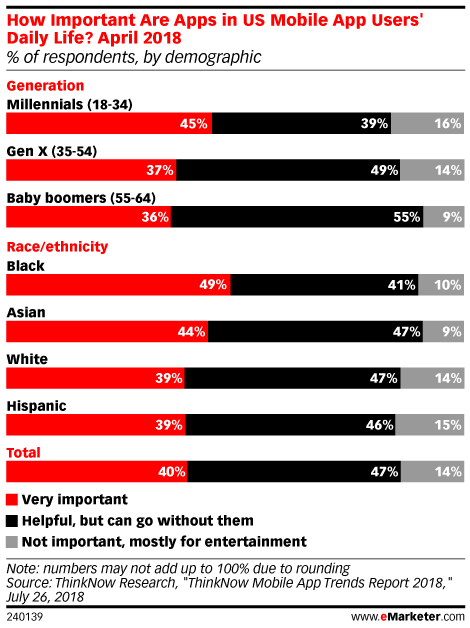 Media Gallery
Chart
How Important Are Apps in US Mobile App Users' Daily Life?, April 2018 (% of respondents, by demographic)

Audio
All Eyes on Biometric Marketing

Article
How Do Consumers Feel About Biometrics?

Article
How Retailers Are Using Biometrics to Identify Consumers and Shoplifters