We couldn’t have been more correct in late 2018 when we predicted that privacy concerns would snowball in 2019, creating greater challenges for digital marketers in audience identification, targeting and tracking.

In a short 12-month window, privacy had a profound effect on various areas of digital marketing. As 2019 wore on, the effects of the General Data Protection Regulation (GDPR) became clearer across the EU and worldwide. Fines—as expected—began to stack up, and the wear and tear of funding, staffing and maintaining compliance efforts—particularly for publishers and other parties required to obtain consumer opt-in and consent—proliferated.

What also became clear was that regulators wanted more from a digital marketplace that readily transacts on customer data. In June, the Information Commissioner’s Office (ICO), which is responsible for implementing GDPR in the UK, published its “Update report into adtech and real time bidding.” The report outlined the concerns the ICO has with the creation and sharing of personal data profiles brought about specifically by real-time bidding (RTB) practices. The report gave the ad tech industry through year’s end to address some of the issues; the repercussions of this mandate will undoubtedly bleed into 2020.

Also bleeding into 2020? The increased crackdown on third-party tracking across the browsers. We expected Apple’s ITP 2.0, 2.1 and 2.2 to have some effects on advertisers’ abilities to target and track audiences in 2019, and we saw the evidence of such effects in advertisers’ decisions to shift dollars from mobile web destined for Safari browsers to in-app ads. And we’re watching closely how Google chooses to enforce privacy settings within Chrome next year.

In some ways, one could say that digital privacy hit a fever pitch in 2019, though it’s a much more accurate assumption that digital privacy problems will hit their peak next year as the California Consumer Privacy Act (CCPA) goes into effect. As was the case before GDPR, many businesses won't be prepared for CCPA as of January 1, 2020, and even more are struggling to ready themselves thanks to the financial and resource burdens that regulation compliance imposes. Already, 84% of US companies are complying with two or more privacy laws, with nearly half complying with six or more, according to an October 2019 poll of privacy professionals worldwide conducted by IAPP and TrustArc.

And as 2020 unfolds, it’s likely that number will climb as other states consider similar regulations and lawmakers even explore federal initiatives, such as the Online Privacy Act.

For more on what we're predicting for digital marketing in 2020, read our recent report: 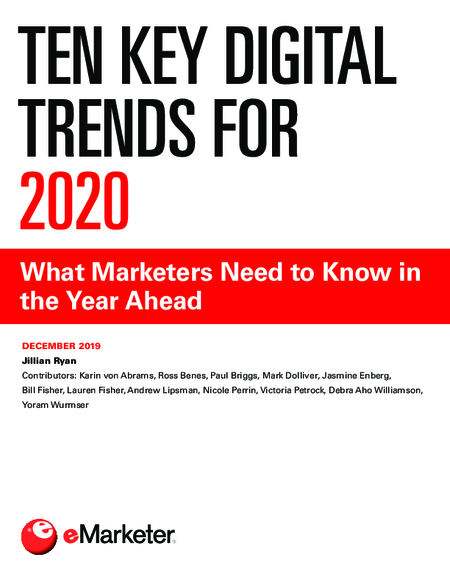 Article
Coronavirus in the UK: Hospitality Industry in Crisis Despite Digital Options

Article
You've Got (Too Much) Mail

Audio
How Will the Coronavirus Change Consumer Behavior?

Article
A Serial Returner Is a Marketer's Best Friend

Article
How B2B Buyer Behavior Has Changed in Light of COVID-19, and What Marketers and Sellers Can Do Now