New and noteworthy media trends for Canada in 2021

For the second year in a row, the pandemic was a major influence on media consumption and device ownership. Of course, many internet users had already experienced the types of restrictions imposed during the first phase of the health crisis in 2020, so we might have expected little change in their media behavior in 2021. That was true in some cases—but in others, a second year of the pandemic seems to have prompted significant shifts. Here's a dive into media and device use trends in Canada in 2021.

Ownership of PCs and tablets declined, as smartphone penetration rose. Time spent with all devices climbed, though.

Large-screen devices still accounted for more time, though – a pattern common in many advanced economies, including the UK, the US and most of Western Europe. The average time spent daily with tablets and PCs rose 11 minutes year over year, to pass the 4-hour mark. Time spent daily with mobile devices was also up, to 2 hours, 48 minutes.

One of the biggest changes we saw: The reach of video—including subscription services—has finally surpassed that of broadcast TV.

Smart TV ownership also rose by several percentage points between H1 2020 and H1 2021, to 49.0%. That share was well above 50% in several demographics, including internet users ages 35 to 64, those in medium- and higher-income households, and those living in suburban areas. 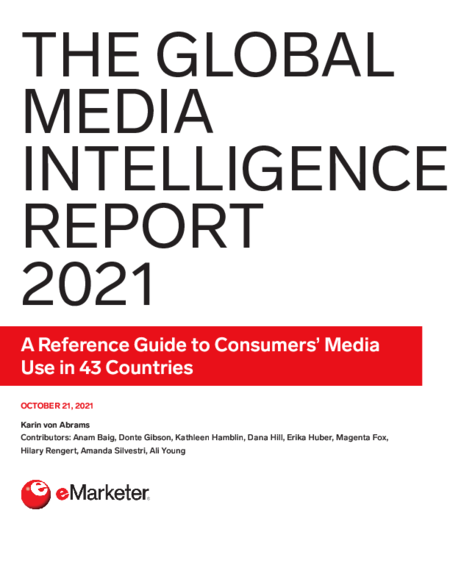 Report
US Generation Z Technology and Media Use

Article
Worldwide ad spending 2021: A year for the record books

Article
Where consumers are most comfortable with secondhand clothing

Article
Fewer consumers than ever are spending on the holidays, period

Audio
Brand Anatomy: How Reddit is growing its brand through international expansion

Audio
Around the World with … Holiday shopping in 2021

Audio
Brand Anatomy: How Reddit is growing its brand through international expansion

Audio
Around the World with … Holiday shopping in 2021

Audio
How insurance is changing, paying when you drive, and insurance as you buy

Audio
The Weekly Listen: Is the metaverse a good idea, goodbye primetime, and second screens

Audio
The 'always-with-you' doctor, health tracking devices, and the 'quantified self'

Audio
Disney+ slows down, HBO Max approaches a milestone, and can Peacock compete?

Audio
The Weekly Listen: How to 'fix' Facebook, TikTok on TV, and Netflix Games