In recent months, both Instagram and Snapchat have made several product changes that are reminiscent of growing contender TikTok. Instagram launched its highly anticipated feature Reels, which allows users to create short videos set to music, and Snapchat introduced a slew of new features, including adding music and a test for vertical navigation.

Instagram announced the global launch of its TikTok-esque feature, Reels, in August. Reels allows Instagram users to create short, 15-second videos, set them to music, and add augmented reality (AR) effects. Reels is currently available in 50 countries, including the US.

Instagram users can post their own Reels to their Stories—where they will live for 24 hours—or to their feeds, where they will appear in a dedicated Reels tab. Users with public accounts can also post their Reels to the Explore tab, through which other users can find and watch their videos. The Explore tab also hosts featured Reels, which are a selection of trending videos by creators and other Instagram users.

It’s not the first time that Facebook has tried to take a page out of TikTok’s playbook. In fact, Facebook shuttered its original TikTok clone, Lasso, in July. Instagram, too, has a history of copying popular features from other social apps and making them more successful—Stories, anyone?

Still, advertisers aren’t totally convinced that Reels could be an alternative to TikTok. According to a survey by Pivotal Research cited by Fortune in September, 61% of advertisers from 54 large ad agencies said Instagram Reels wasn’t an effective competitor to TikTok.

Snapchat introduced a variety of new updates to its app, including adding music, a test of vertical navigation, and a new personalized feed—all of which make it a more direct contender to TikTok.

In early August, Snapchat began allowing users to embed music in videos recorded on the app. Sound familiar? It should; music is what makes TikTok tick. The Snapchat feature is currently available to users in Australia and New Zealand and will roll out to all English-language users in the fall.

Snapchat confirmed to The Verge in July that it was also running a test that allows users to swipe through public content on Discover vertically, instead of horizontally. (TikTok’s navigation style is vertical, and some users consider it a more natural and engaging way to view videos on a smartphone.) Snapchat users still tap to advance through their friends’ private Stories, however, and use a horizontal swiping motion to exit Stories.

Another test that Snapchat is running allows users to share proprietary Snapchat content on other platforms. Snapchat already allows users to share their own Stories outside of its platform, but this new experiment enables users to also share original shows, Publisher Stories, and other public content via a link. Off-platform sharing of TikTok content is already common practice: TikTok videos are regularly shared on other platforms through a link that directs users and non-users to view the content on TikTok.com. That’s likely one reason why TikTok.com averages more unique US visitors per month than the TikTok app does, at 52.2 million versus 28.8 million in March 2020, per Comscore.

Finally, Snapchat is also testing a new version of its “For You” feed called “Spotlight,” according to Axios. The personalized feed will feature content from creators, curated stories, and publisher content, and users will be able to submit their own content to the feed. One of TikTok’s biggest draws is its curated “For You” feed, which viewers can access with or without an account. The feed’s highly coveted algorithm is also credited with creating many of TikTok’s biggest stars, who are another reason for the platform’s popularity.

To learn more about the biggest social media updates of Q3, including monetization, audience, commerce, and new features, eMarketer PRO subscribers can read our recent report: 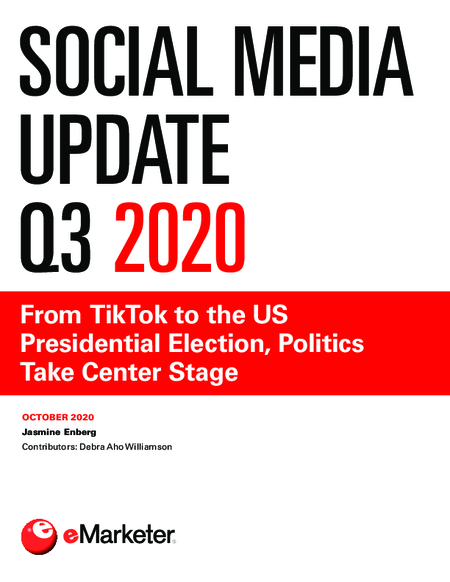 Article
Creators are becoming a serious business for brands

Report
Marketing in the Short-Video Landscape

Report
The US Short-Video Landscape

Audio
Clubhouse and the Social Audio Movement: The good, the bad, and the others

Audio
When will travel (advertising) recover, do social platforms look too similar, and what will happen ...

Report
Analyst Take: How Brands in Latin America Are Addressing Diversity and Representation in Advertising

Report
US Ecommerce by Category 2021

Report
Analyst Take: The Outlook for US Podcast Ad Spending in 2021

Article
Achieving holistic attribution is more a journey than a goal

Article
Creators are becoming a serious business for brands

Audio
How Spotify might become the Netflix of audio, radio preferences, and voice ad best practices

Article
Duopoly still rules the global digital ad market, but Alibaba and Amazon are on the prowl

Audio
How Spotify might become the Netflix of audio, radio preferences, and voice ad best practices

Audio
How Twitter began 2021, why it acquired Scroll, and its 'professional profiles' test

Audio
What Facebook's Q1 earnings mean, how Facebook Dating is doing, and a smart wristband

Audio
LinkedIn is evolving, virtual vs. in-person 2021 events, and how robots may help us work

Audio
How addressability and measurability are changing in digital advertising