How Boomers Are Aging in Place

Aging in place evokes an image of baby boomers staying put in the homes they’ve inhabited for decades, leaving only when carried out feet first. But it’s tempting to suggest that the phrase describes boomers’ lives in general as they become certifiably elderly. Amid chatter about boomers transforming the nature of old age, the reality is that they’re moving through a stage where people are more attached to what’s familiar and less attracted (or even averse) to what’s novel.

So, in addition to remaining in their homes, many boomers stick with traditional TV as the core of their entertainment mix. Those who’ve adopted social media have settled in with Facebook and seldom range farther into the socialsphere. They’ve acquired smartphones, but stick with simple apps like texting. Facebook is the one social network with a large constituency among boomers: 45.3% of them use it, including 91.9% of boomers who use any social network. Penetration among total boomers in the US is far lower for Instagram (13.2%), Twitter (8.5%) and Snapchat (4.3%).

Whatever their smart-aleck offspring might think, boomers aren’t utter Luddites. As early adopters of personal computers, they were at the vanguard of the digital revolution. But boomers are increasingly at an age where adopting new technologies doesn’t come naturally.

We estimate that 79.2% of US boomers will be internet users this year—a substantial number, but lower than penetration for Gen Xers (93.1%) and millennials (96.1%). And we anticipate virtually no growth in penetration through 2023.

Boomers also lag in intensity of internet usage, to judge by Pew Research Center polling in February 2019. The 50- to 64-year-olds (an age bracket that includes a good number of Gen Xers) were barely half as likely as 30- to 49-year-olds to say they use the internet “almost constantly.” Among respondents ages 65 and older, fewer than one in 10 reported doing so.

Still, the “aging in place” theme shouldn’t be overstated. Along with the stasis in boomer lives, there is plenty of flux—some unsought as the labor market expels many before they’re ready to retire. Digital tools are infiltrating boomers’ approach to shopping, including widespread adoption of ecommerce. And boomers who remain in familiar homes are driving the market for home remodeling. If “aging in place” is emblematic of boomer life, “remodeling” is part of the story, too.

Amid their fascination with millennials and Gen Zers, some marketers may wonder why they should care about boomers. The answer is simple: Boomers still have lots of money. Though many boomers are retired, the most recent Bureau of Labor Statistics data shows their yearly household income is still above the average for total households ($80,086 vs. $78,635) and far above that of millennials ($67,076). Being older also means having had many years to accumulate assets.

An April 2019 report by Packaged Facts said boomer households have 54% of total US household net worth. Boomers have their financial challenges, but for now, they have too much money for marketers to leave on the table.

For insight into how boomers have gone digital as shoppers, eMarketer PRO subscribers can read our recent report: 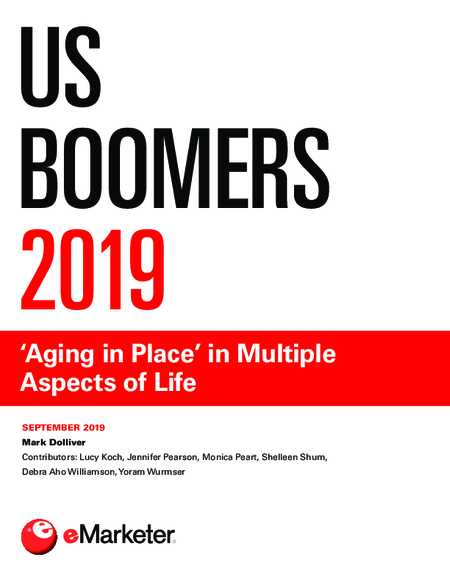 Article
Most US adults have never used a BNPL service

Article
Consumers know their data is worth something—but what exactly should marketers offer them in ...

Article
Gen Z has the travel bug this holiday season

Report
The Evolving Role of the CMO

Report
The Evolving Role of the CMO

Audio
The Weekly Listen: The future of shopping, instant delivery, and the rise of experiences

Article
The top ways US patients are using telehealth

Article
Why 2022 will be the year of retail media networks

Forecasts
POS Terminal Installed Base, US

Audio
The ever-changing CMO, capturing B2B audiences, and just how right is the customer?

Audio
The Weekly Listen: The future of shopping, instant delivery, and the rise of experiences

Audio
The Weekly Listen: What's next for cable, searching differently, and CES 2022

Audio
Brand Anatomy: How Renfro Brands is building a strong and diverse portfolio