The TV and OTT landscapes continue to shift and slide as consumers adopt digital video and streaming options, and the companies producing long-form content make bets on where audiences will spend their time. Here are eight digital video market predictions for 2019.

No. 1: The rate of cord-cutting will continue to accelerate. Cord-cutting will be driven mostly by the increased adoption of linear OTT services, which are on track to more than double their US audience in the next four years, and in smaller part by a surge in over-the-air (OTA) antennas (everything old is new again, like vinyl!). Despite the rising incidence of cord-cutting, the stakeholders in the traditional TV business will be just fine because they’re all invested in broadband service, content ownership, digital distribution or some combination of the above.

That’s the smallest growth factor since FX Networks started keeping track of shows in 2009, and it pales in comparison to double-digit increments in 2013 and 2014, and even the 2017 growth multiple of 7.0%. Streaming outlets showed the most growth and became the largest single contributor of programming in 2018, but their success came at the expense of broadcast and basic cable, which declined significantly. There are only so many hours in the day to binge-watch Netflix, Amazon, Hulu, HBO and ShowTime, not to mention DVR-ed network shows.

No. 3: At least one social media company will scale back its spending on video content. Facebook, Instagram, Twitter and Snapchat are investing billions in creating shows for their respective platforms, but the business case for that kind of programming is unclear. The most effective way to monetize long-form video in an ad-supported context is through pre-roll and mid-roll ads in a lean-back experience. However, most social video shows are geared for mobile viewing. A shakeout, or at least a pullback in spending, seems inevitable.

No. 4: Subscription fatigue will claim at least one major SVOD or linear OTT service. People are already hard-pressed to determine which among a rapidly growing number of subscription services are worth $10, $20, $30 or more per month. Add planned 2019 launches from Disney and AT&T into the mix, and you have a recipe for attrition. It doesn’t help that some of the linear OTT services appear to be priced below where they need to be in order to hit profitability. That means it’s likely that at least some of the incumbent services will face the double whammy of more competition while having to raise their prices.

No. 5: Any misstep by Netflix will raise serious questions about its business model. When the company missed its subscriber targets in Q2 2018, investors and pundits seemed ready to write its obituary. The company bounced back with a boffo Q3, but that won’t insulate it from a fusillade of existential questions should something go even slightly awry in 2019.

The simplicity of Netflix’s business model is its strength and weakness. On one hand, doing only “one job” means the company is hyper-focused. But with subscribers as the only metric that matters, and with Netflix hurtling toward a likely subscriber saturation point in the US, one has to wonder what happens next. If 2019 isn’t the year when Netflix has to pull a rabbit out of its hat, 2020 almost certainly will be.

No. 6: Apple will finally make a serious push into the TV space. For years, Apple has signaled its intention to compete in this arena, first by developing a product named Apple TV, and more recently by announcing it would spend $1 billion on original content in 2018. It’s unclear how Apple might approach this business, or why it has stayed on the sidelines for so long. But given its brand strength, its expertise in technology and content, and its ties to Hollywood, it’s hard to envision a part of the TV ecosystem in which the Cupertino company can’t compete. It seems to be only a matter of time before Apple flexes its muscle in this space.

No. 7: Connected TV advertising will continue to scale up, and up to 20% of it will be transacted programmatically. There are many reasons why advertising has lagged consumer adoption of connected TV, but as the industry works through technical, business and workflow challenges, the gap will start to close.

No. 8: TV network groups will continue to push for ad targeting and measurement platforms designed to work across linear and digital. 2018 ended with CBS and Nielsen failing to renegotiate their ratings contract. Whether they’re able to reach an agreement in early 2019 remains to be seen, but the writing is on the wall that Nielsen’s legacy ratings system doesn’t fully serve the needs of broadcast groups in a multiplatform world.

More about the challenges facing connected TV advertising can be found in this report. eMarketer PRO subscribers can read the full report now. 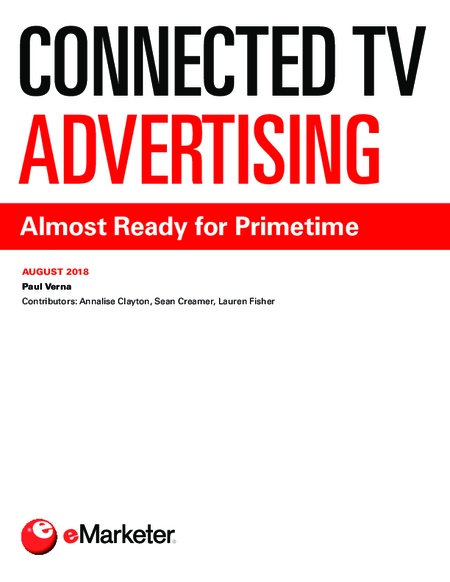