Boomers Are Slower to Adopt New Technologies, but They’re Likely to Stick with the Ones They Value

Boomers aren't entirely nondigital⁠—they were, after all, the pioneers of adopting home computers—but at this point in their lives, they're a bit more reluctant about adopting newer technologies. That's true even for tech with real-life utility, such as voice assistants and smart-home devices, which could help boomers age in place and deal with the physical challenges that accompany increasing age. Along with concerns about things like privacy, it’s partly a matter of the inertia about adopting new things that tends to set in as one gets older.

Voice technology is a conspicuous example. It ought to have appeal for older boomers, whose ability to read a small screen and manipulate a tiny virtual keyboard may be declining. Yet boomers who own smartphones have lagged in using the voice assistant capability. We estimate that 38.6% of smartphone boomers will use the voice assistant this year, vs. 49.0% of Gen Xers and 53.1% of millennials.

Boomers also have scant adoption of smart-home technology, such as monitoring devices, internet-connected home thermostats and smart appliances. According to a September 2019 AARP survey, penetration of such devices was lowest among the oldest boomers (who might benefit from them most)—falling from 11% among 50- to 59-year-olds, to 10% among 60- to 69-year-olds and to 7% among those ages 70 and older. Boomers also lag in adopting smart speakers, which bump up against their chronic worry about digital privacy. We expect just 17.6% of boomers to own smart speakers this year, barely half the device’s penetration among Gen Xers.

Telehealth adoption has risen across age groups during the pandemic, but among boomers, the increase has come from a low pre-pandemic base. In November 2019 Gallup polling, 7% of US adults ages 55 and older (vs. 18% of 35-to-54s and 16% of 18-to-34s) reported using mobile apps to track their health. More broadly, YouGov polling in the same month found 7% of boomers (vs. 13% of Gen Xers and 18% of millennials) had used telemedicine technology to communicate with their doctor.

Boomers’ below-average usage of telemedicine pre-pandemic leaves open the question of whether their recent behavior will stick long term. That said, CivicScience polling published in May 2020 found the proportion of adults in the US ages 55 and older who had tried telemedicine rose from 13% in March to 28% in May. And its April polling found that 73% in this age group who tried the technology were satisfied with the experience.

When boomers and seniors do try a new technology and find practical benefit in it, they're likely to stick with it, according to Dr. Alison Bryant, senior vice president of research at AARP. “They may not literally be the first kid on the block to adopt it,” she said. “But once they do, they will use it if it’s of value to them. And they have the discretionary income to actually purchase it.”

To learn more about how the boomers are handling the COVID-19 recession, eMarketer PRO subscribers can read our recent report: 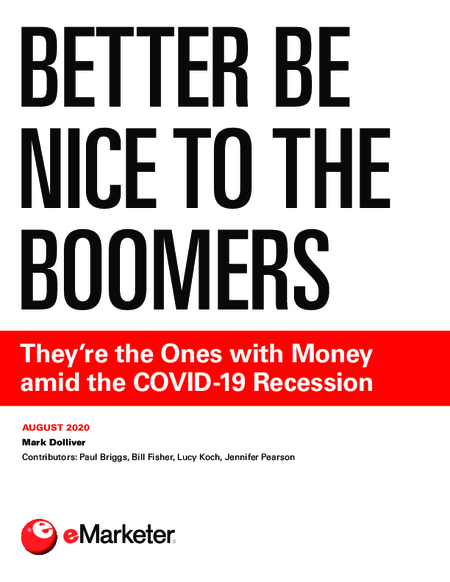 Report by Mark Dolliver Aug 03, 2020
Better Be Nice to the Boomers

Article
Where do US consumers begin their product searches?

Article
COVID-19 got AI into more health systems’ doors, and AI vendors have a ripe opportunity to hold ...

Article
Amwell could hop on the telehealth M&A bandwagon as the industry turns to consolidation to stay ...

Article
Cerner’s free telehealth platform for rural hospitals could help it leapfrog Epic to the top of the ...

Article
7+ Months In: How the pandemic has affected our forecasts in 2020

Article
Here are the biggest impacts a Trump or Biden presidency could have on digital health innovation and ...

Audio
What Happens to Print During a Pandemic?

Report
THE UK NEOBANK COMPETITIVE EDGE 2020: How the top 4 UK neobanks stack up on offering consumers' most ...

Report
US Social Media Advertising in 2021

Report
THE BANKING DIGITAL TRUST REPORT 2020: How consumers rank the top 10 US banks on Security, Privacy, ...

Report
CANADA BANKING TECH SPEND FORECAST: What's driving IT spend growth in Canada, how it will be ...

Report
US Social Media Advertising in 2021

Report
THE UK NEOBANK COMPETITIVE EDGE 2020: How the top 4 UK neobanks stack up on offering consumers' most ...

Article
Email marketing in 2021: The importance of measurement, ROI, and budgeting

Article
Should brands make social and political statements? About a third of US adults now expect that, but ...

Forecasts
Enterprise Use of Collaboration Tools, US

Audio
The Weekly Listen: What we are thankful (and not thankful) for this year

Audio
How to think about the video streaming universe

Audio
How Prime Day went, and how holiday shopping will go

Audio
Disney+ has become a household name after 1 year. Can it take on Netflix?

Audio
The Executive Roundtable: David Cohen of the IAB on how digital advertising is adjusting to ...

Audio
Spotify Positions for Podcasting, Alexa Asks Follow-Ups, and the Apple One Bundle

Audio
The Ad Platform: How the MRC Is Creating Standards for Measuring Outcomes

Audio
The Weekly Listen: What's Next for Section 230, AMC Theatres in Trouble, and Changing Media Tides

Audio
Facebook's Surprising (and Unsurprising) Earnings, Its Oversight Board, and the Threat From Gaming