Ads on WhatsApp are to be expected sometime in 2020. And most advertisers we spoke to for our new report on global messaging apps agreed that Status—WhatsApp’s version of Stories—makes sense as a testing ground for ads.

It’s the most “social” feature of the app, and while chats are intended for one-to-one or one-to-several communication, Status updates are one-to-many—the calling card of social networks. People are already accustomed to seeing ads there.

“Consumers have come to expect ads to pop up pretty much everywhere they engage on social,” said Chelsea McDonald, senior social media strategist at DEG, Linked by Isobar. “In one-to-one messaging, it’s less expected because it’s more private. But since the ads will be in Status, I think consumers will engage with and respond to them in a similar way to Instagram or Facebook Stories ads.”

There is little data on consumer attitudes toward Stories ads, but there is research to suggest that they perform reasonably well. Measurement platform Conviva analyzed 13,000 Stories from the top 300 Instagram accounts during Q1 2019, finding that the average completion rate was 84%. That was up from 73% in Q1 2018. Average reach was just 6.7%, likely because viewers can skip over Stories ads they don’t want to see.

Yet, despite sharing similar features, Instagram and WhatsApp are independent platforms with different use cases. Instagram users follow and interact with a range of different accounts from friends to influencers, celebrities, publishers and brands. In a January 2019 Facebook-commissioned report by Ipsos, 66% of Instagram users worldwide considered the platform a place to interact with brands. Engaging with celebrities and influencers was also a top-cited response when respondents were asked what they associated with Instagram.

Meanwhile, WhatsApp interactions—including those on Status—are limited to contacts in a phone book, which are primarily friends and family. “Even where we’ve built features that allow for broader sharing, [WhatsApp] is still a less public experience [than Facebook’s other apps],” CEO Mark Zuckerberg said in a March 2019 Facebook post.

“I would say that Snapchat is probably the best analogy of what exists today in terms of how to understand WhatsApp Status ads,” said Joe Yakuel, founder and CEO of digital marketing firm Agency Within.

That’s because both apps were originally created for one-to-one messaging, and they keep their messaging functionality separate from Stories. On WhatsApp, users have to open a different tab to view Status updates. The same is true for Snapchat, while Stories on Facebook, Instagram and Messenger appear at the top of a user’s feed or chat log.

With that in mind, advertisers are generally optimistic about the upcoming launch of WhatsApp Status ads. Some initial consumer pushback is expected, but users should come to accept them as they have other forms of digital advertising.

“It’s going to be similar to any new platform when ads become available," said Liz Cole, vice president and group director of social strategy at Digitas North America. "The first bad ads and the first best ads will really stand out, but eventually, most ads won’t be remarkable in either a positive or negative way.”

For more analysis on WhatsApp and other messaging apps, read our new report. 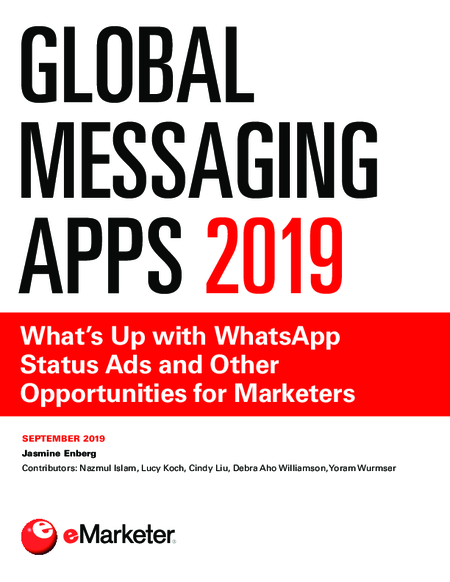 Audio
The Weekly Listen: The attention recession, why shoppers like SMS, and is Peloton slowing down?

Article
Mailchimp wants to put itself on the market

Article
Facebook wants to use encrypted data to target ads

Article
WhatsApp will no longer deactivate or limit the functionality of accounts that refuse its ...

Article
WhatsApp’s privacy update went into effect, but some regulators are fighting against it

Article
Signal plays up its privacy stance with an ad campaign that makes Facebook’s targeting transparent ...

Report
The US Digital-Only Banking Revolution

Report
The Power of Amazon

Audio
How the delta variant is changing behavior, ads during tragedy, and events in limbo

Article
Amazon Business has grown about 50% each year since 2018

Audio
Around the World with ... Retailers gearing up for the golden quarter

Audio
Our relationship with cable, counting co-viewing, and a new Paramount+/Showtime bundle

Audio
How the delta variant is changing behavior, ads during tragedy, and events in limbo

Audio
Why Amazon is launching its own TV, Peloton apparel, and how lululemon is doing so well

Audio
D2C brands' next playbook, loyalty program expectations, and the significance of context

Audio
The Weekly Listen: Life won't be the same, WhatsApp's GDPR fine, and is convenience king?

Audio
Publisher takeaways, ads placed around news, and does targeting get too much credit?